(1a) (Cage the Elephant’s) setlist

Jesus, this band has a lot of fans and it’s pretty clear why. They have big songs, even bigger crowds, and some straight up memorable numbers. Great show.

Seeing Morrissey live was a hugely emotional experience for me as a long-time Smiths fan and long-time Moz fan and I feel like maybe only a dozen others felt the same in that crowd in Dover. He sounded like heaven to me; I was beside myself every time a Smiths’ song played, and I’ll never forget that he was actually physically standing and singing right there in front of me. It was a dream. A very anxious dream where I prayed he wouldn’t storm off because Firefly was definitely not meatless and I’m pretty sure I ate a chicken sandwich that day and felt like is Moz looked at me, he would immediately know, but IT WAS STILL A DREAM.

I really cannot underscore enough that this Paul McCartney performance was the greatest show I’ve ever seen in my life. Nothing will every really touch this show for reasons I can’t even put into words, but it really all comes down to a feeling. And that feeling is this: standing in a muddy Delaware field late at night with 30,000 people, covered in mosquito bites, so freaking tired from the hottest and longest day ever, being with my three closest concert buddies who I’ve all known for more than 10 years and who knowingly or unknowingly have gotten me through some of the toughest times in my life, crying my freaking eyes out, and singing in perfect unison “Naaaaa naaaa na na naaaaaa, na na na naaaa, hey Juddddeeeee.” That’s not a feeling you forget for the rest of your life. 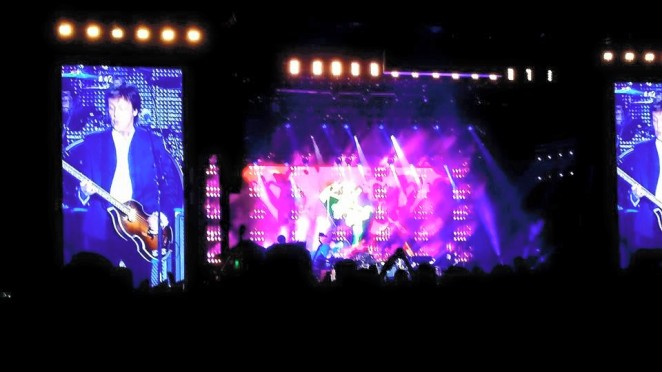