Joywave have grown quite a bit in the past year or so. I feel privileged to have seen Joywave a little less than a dozen times now over the last three years, so I’m pretty confident in thinking that their best days are ahead of them. They’re fun, solid performers who know how to take control of the audience and set the mood quickly and assertively.

Because they’ve opened for and toured with so many different bands – Bleachers, Betty Who, Silversun Pickups, Foals, Brandon Flowers, Kopps – their audiences at every show seem to be wildly different. This Music Hall of Williamsburg show in particular had a very, very young audience with only about half having seen the band before. Marketing can do a lot, right?

Essentially, the energy was high, the setlist was great, and baring a few sound issues, Joywave was fantastic. They mentioned they were recording for their next album, which can only mean good things, and I definitely will go out of my way to catch them again.

Bottom line: If you like solid tunes, sassy frontmen with bad facial hair, and a good time, check out Joywave. Or The Killers circa the 2006 Sam’s Town era – both aptly apply. 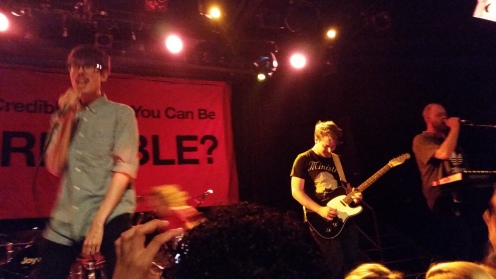